Central Florida Organics
Back to farms 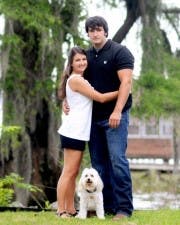 Brick Rooks worked on a blueberry farm as a teenager, enjoying life outside and the responsibility given to him by his boss.  Later, while earning his degree in Quantitative Economics at East Carolina University, his former boss predicted that blueberry farming was in Brick’s future, even though he was not attending an agricultural school.  Realizing that office life was not for him, Brick did indeed return to the land, starting his own blueberry farm in the town of Whiteville, North Carolina.  He and his wife, Jennifer Blackmon Rooks, named it Southern Belle Organics.

The blueberries were initially grown conventionally, but to meet customer demand for organics and with some gentle encouragement from his wife, Brick converted the land to organic practices just a few years after starting.  Brick’s farming, marketing, and business background combined with Jennifer’s love of interacting with the customers has led to their quick success.

As a young first generation farmer, Brick is proud to have built his business from the ground up (literally!).  A self-proclaimed perfectionist, he oversees all aspects of production (growing, shipping, and packing) on the 60 plus acres of land.  Southern Belle Organics currently offers certified organic blueberries from May through September, but Brick hopes to expand to blackberries, strawberries, and other fruits in the future.

Anything from Southern Belle Organics this week?
nope! not this week.